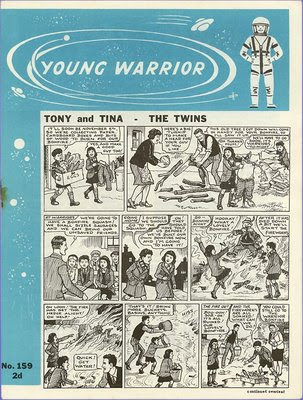 Dudley D Watkin's Young Warrior Comic Strips. Easily my favourite British cartoonist and revered illustrator of Desperate Dan, Lord Snooty, The Broons and Oor Wullie, Dudley D Watkins also had a lesser known artistic sideline producing Christian tract strips for the Worldwide Evangelisation Crusade during the 1950s and 1960s. Watkins was a highly religious man and always kept a huge Bible near his drawing board. His Bible had wide margins in which he would scribble copious notes when inspiration took hold. Watkin's place of worship was the Dundee Church of Christ, a Free Protestant community where he met his wife.

From 1956 he drew and wrote William the Warrior, a schoolboy character much given to scripture quotations and musing on moral dilemmas. Later he created Tony & Tina, the Warrior Twins (see above) for the Young Warrior Christian Children's Paper. These strips were collected and published in booklets during 1966 and 1969.