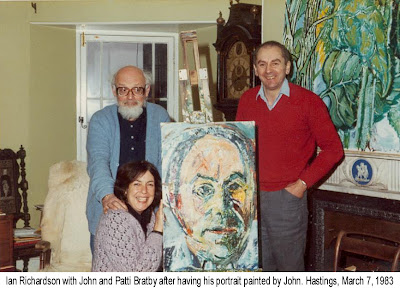 John Bratby revisited. When I wrote about the slightly-neglected British "Kitchen Sink" artist John Bratby in my September 13th post I didn't expect much of a response and true enough, no blog comments were received.

A little while later though I received an email from musician and artist Harley Richardson with a very interesting and unexpected Bratby connection. His Dad, Ian Richardson, a former BBC employee, had once had his portrait painted by the great palette-knife wielder. I knew Bratby had concentrated on portraiture since the late 60s and his sitters had included British luminaries like John Betjeman, Sir Alec Guinness and Spike Milligan, but never dreamed I would hear first-hand details of what it was like to be painted by the whiskered one. Ian Richardson has kindly written about his encounter especially for Bagnall's Retreat and this is what he remembers:

"When I was on the BBC staff, any mail for 'Ian Richardson' would come to me and that would sometimes include fan letters for my actor namesake, who had made a name for himself, not least in 'Tinker, Tailor, Soldier Spy'. Late in 1982, I opened an envelope to find a letter from John Bratby inviting me to pose for an exhibition 'The Individual in the Growing Egalitarian Society'. I was told that the exhibition would also include new portraits of the Queen Mother, Paul McCartney and a number of other prominent folk. Clearly the invitation was not intended for me, so I wrote back to John, saying how flattered I was but the invitation was obviously for the actor and had been forwarded to him. This amused John and he thought it would be fun to paint both Ian Richardsons, so in March 1983 my wife and I went to his house in Hastings and sat for several hours as he did the large portrait using a palette-knife and oils. Throughout the sitting, his wife, Patti, brought me coffee in an outsize cup and saucer...plus a frequent supply of bacon sandwiches. She would take the opportunity to study the progress of the portrait, then would return a few minutes later to hand John her comments scribbled on a scrap of paper.

As John and I parted he gave me a signed copy of his book 'Breakdown'. It was intended for his psychiatrist and already had a hand-written dedication in the fly-leaf, but John had simply added my name and the date and handed it to me. My actor namesake declined to be painted by John and my portrait never appeared in the exhibition. John later offered to sell it to me for £300, but I was so poor at the time that I couldn't afford it. Later, after John had died and I was financially better off I contacted Patti Bratby asking if the portrait was still available, but she couldn't find it anywhere among his collection."

Posted by John Bagnall at 11:59 AM No comments: 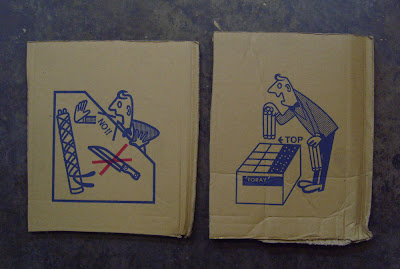 Cardboard Box Art. I've always liked the simple images you find printed onto functional cardboard boxes. At a time when most graphic communication is over-sophisticated and pretentious the sight of a basic pictogram warning a warehouseman to go easy with his Stanley Knife warms the cockles of my heart. I cut the above example off a box found this week and the image seems to be a more eccentric variation of the message "careful with your knife when opening this box". My interpretation is this: Don't insert your beef-slicing cleaver into this packaging or you might split the thread on the bobbins inside, especially when wearing a dickie-bow.

A comic strip of moral advice. Mind you, I need to take note of that advice more than most, and I wrote and drew the blinking thing! 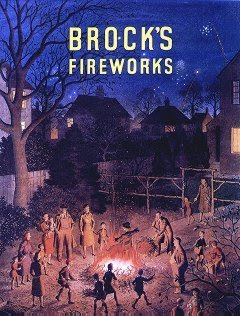 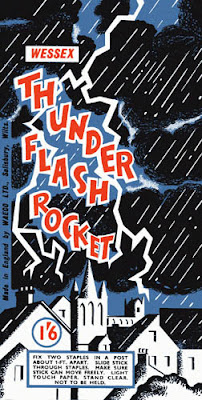 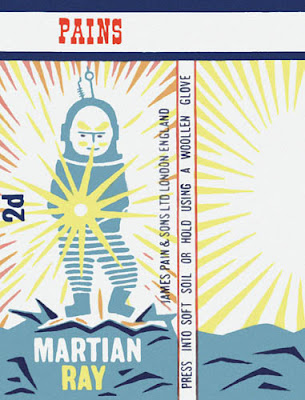 Firework Art. Walking to church this morning at 8.30am I couldn't help taking note of the previous night's firework detritus in the streets. Not only were the used label designs disappointingly perfunctory, unimaginative and basic but most people seemed to have celebrated Bonfire Night two nights early!
When I was in short trousers I used to look forward to the morning after Bonfire Night so I could gather up the burnt-out rockets and roman candles which were scattered in the streets. The label designs then were perhaps more exciting than anyone's actual firework displays. Here is a small sampling of beautiful Firework Art from the 50s and 60s. Even the names of these old firework companies conjure up a million associations of Old England: Brocks, Wessex and Pain's. The first Brock's Fireworks poster alone is an anonymous masterpiece in my eyes. 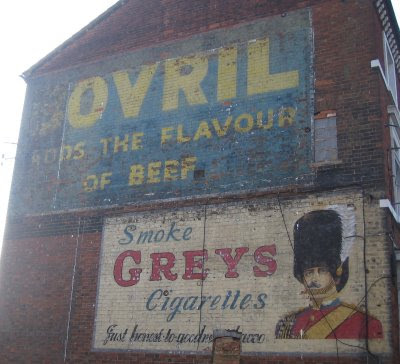 Loyal readers will know that hand-painted signs are one of the regular obsessions of this blog, including rare "ghost signs" painted onto brick. I can't take credit for the above double beauty, though. It's from Sam Brown's excellent brickads site. For more of Sam's fine collected vintage advertising go here.
Posted by John Bagnall at 11:39 AM No comments: